The University of Vechta looks back on a long and eventful history that started in 1830. It has been affected by political changes, willingness for reform, and various other dynamics. Cosmopolitan, personal, and familial – the university represents its philosophy “Responsibility is Key” and wants to be a source of inspiration for the future. Its self-image is characterised by a close connection to the region, internationality, interdisciplinarity and intercultural competence. The tradition of teacher training has shaped the university’s identity for almost 200 years, as well as the location in the Northwest of Lower Saxony, i.e., the Oldenburg Münsterland, a rural region with a very dynamic economic, demographic, and social development.

1830 – Foundation of a Normalschule in Vechta

In 1830, Augustus, Grand Duke of Oldenburg (image), founded a Normalschule (normal school) for his Grand Duchy of Oldenburg. Following the example of Bernhard Overberg (1754-1826) from Münster, a representative of progressive education, the aim was to ensure qualified teacher training for the Catholic areas in South Oldenburg. Unlike in the Protestant Lehrerseminar (teacher training seminar) in Oldenburg, women were also allowed to attend courses at the Normalschule in Vechta. From 1881, female teachers were trained in the newly established Lehrerinnenseminar (teacher training seminar) of the Order of the Sisters of Notre Dame. The courses at the Normalschule took up to one year and were attended by an average of 30 participants.

In 1912, the seminar building on Marienstraße was significantly extended (see photo above). While only 55 seminarians were trained in 1880, in 1915, 111 prospective teachers were attending the educational institution on Marienstraße. 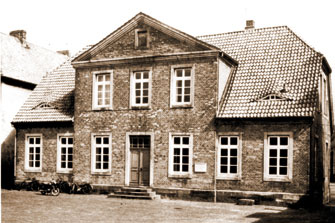 1928 – Opening of the Pädagogische Lehrgang

After World War I, teacher training was turned into an academic discipline. From then on, training was to take place in separate (Pädagogische) Akademien ((pedagogical) academies). This development failed in Vechta so that the Pädagogische Lehrgang (pedagogical course of studies) was established in 1928 as the successor institution of the Lehrerseminar. The Pädagogische Lehrgang was held at the Elmendorffburg (photo). It was very different from the Lehrerseminar: Abitur (A-levels) became an entry requirement for teacher training, women were admitted to the courses and the majority of lecturers held doctorates. Lecturers and students were entitled to rights of participation in academic self-governance.

Due to a shortage of money and a strong surplus of teachers, the Free State of Oldenburg closed its pedagogical courses of studies in Oldenburg and Vechta in 1933. 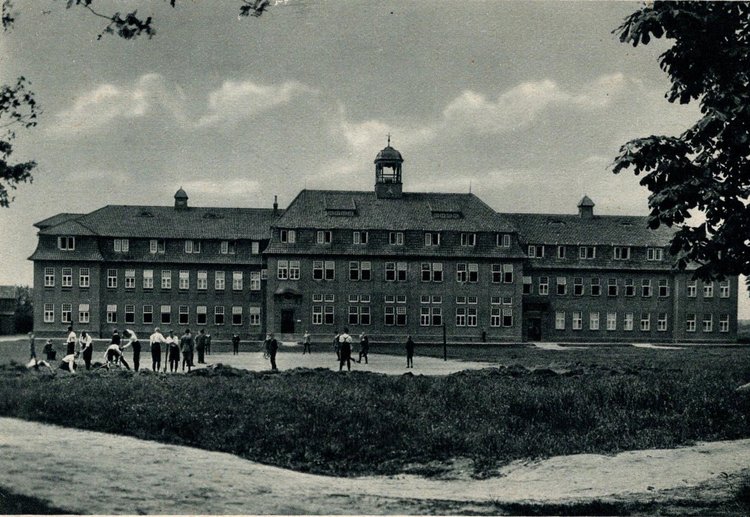 In the 1930s, the National Socialists deconfessionalised teacher training and reorganised it. They set up Aufbaulehrgänge (advanced courses) for primary and lower secondary school pupils to give them the chance of becoming teachers. The Vechtaer Aufbaulehrgang (advanced course in Vechta) was converted into a teacher training institution in 1941 and housed in the seized Dominican monastery Füchtel (photo). A five-year training was planned, which none of the students completed in full, as the teacher training institution closed with the end of the National Socialist tyranny. 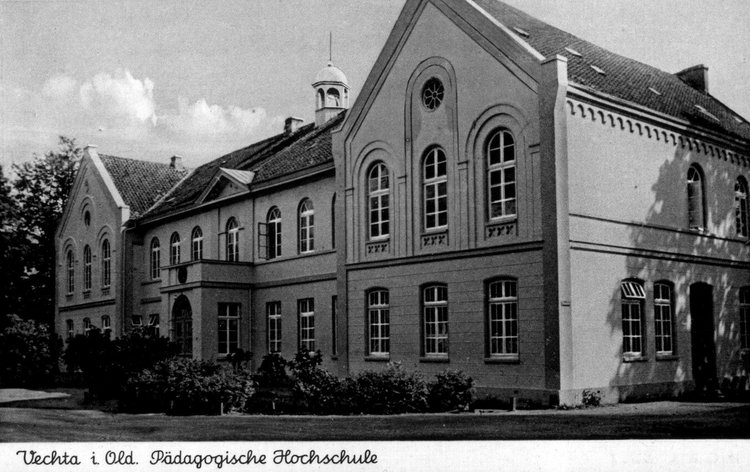 The foundation of a Pädagogische Akademie (pedagogical academy), which had failed some 20 years earlier, was completed in 1946. On 19 March, the Staatliche Pädagogische Akademie (state pedagogical academy) was founded in Vechta as a denominational teacher training institution. In the same year, the Free State of Oldenburg was incorporated into the state of Lower Saxony and the Pädagogische Akademie Vechta was taken over by the state. One year later, the academy was renamed Pädagogische Hochschule (college of education). The first class had 64 male and 29 female students. The two-year course of studies, which first started in autumn 1946, included education studies, teaching theory and practice of the individual subjects, in-depth study of the subjects, practical/musical training and elective courses. The new educational institution was temporarily housed in the old building of the Gymnasium Antonianum on Bahnhofstraße (photo). 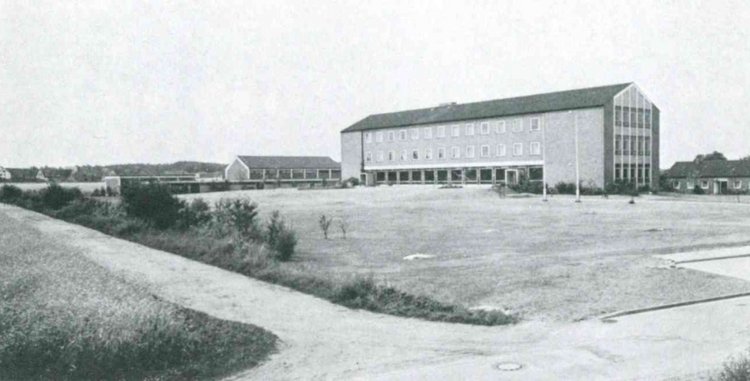 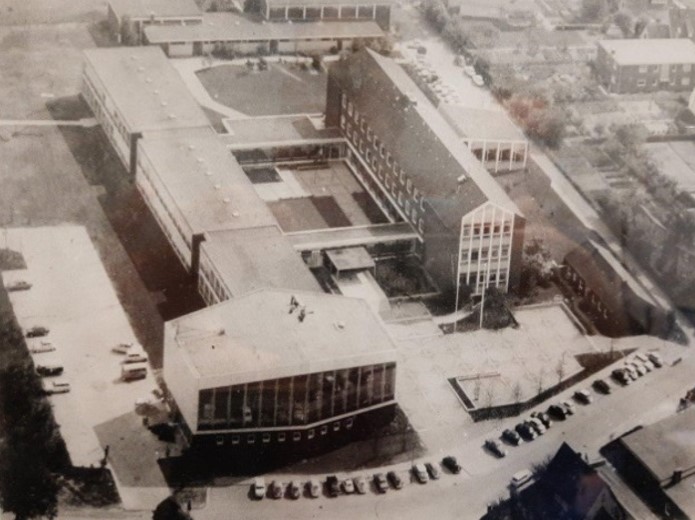 In 1973, the Pädagogische Hochschule Vechta was incorporated into the newly founded Osnabrück University as an off-site campus. Over the years, the range of degree programmes expanded. New subjects were offered for the teaching profession for higher secondary schools (Gymnasium), the Diplom programme Education Studies and the four Master’s degree programmes Social Sciences, English Studies, German Studies and Modern History. In 1980, the off-site campus in Vechta had over 1,000 students.

The campus was considerably expanded in 1983. New buildings for the library, dining hall and seminars were added. The hiring freeze for teachers that began in 1985 resulted in declining student numbers (to about 730). The off-site campus in Vechta was threatened with closure. 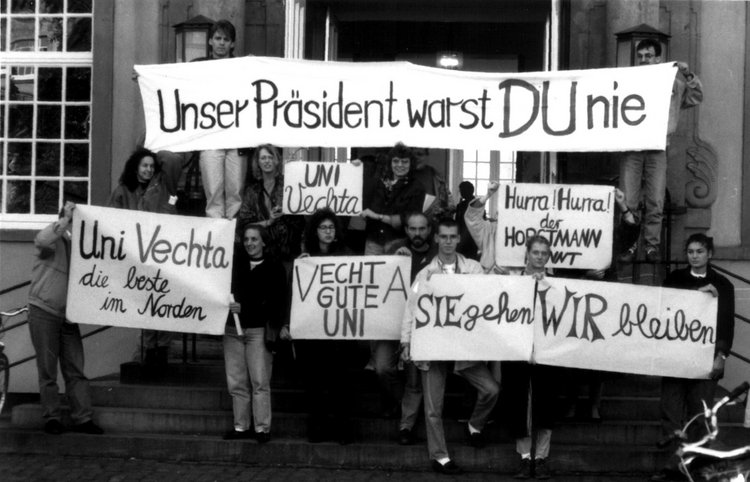 In 1990, the newly elected state government announced its intention to close the off-site campus in Vechta. In response to this development, the Bürgerinitiative PRO UNI im Oldenburger Münsterland (citizens’ initiative PRO UNI in the Oldenburg Münsterland) was formed in 1991 and had around 22,000 members. Protests from the university and the region arose. The decisive factor was that the Catholic Church insisted on the Niedersachsenkonkordat of 1965. The Niedersachsenkonkordat guaranteed the training of Catholic teachers in Vechta. The photo shows a student demonstration in Osnabrück at the farewell ceremony for the President of the university, Prof. Dr Horstmann.

In 1993, the Niedersachsenkonkordat of 1965 was amended. The amendment agreement states: “The Vechta campus of Osnabrück University shall be transformed into an independent higher education institution (...) in accordance with the more detailed provisions of the Lower Saxony Higher Education Act (NHG) and shall be granted a special legal status.”

"This translation is for information only. The original text is only available in German language." 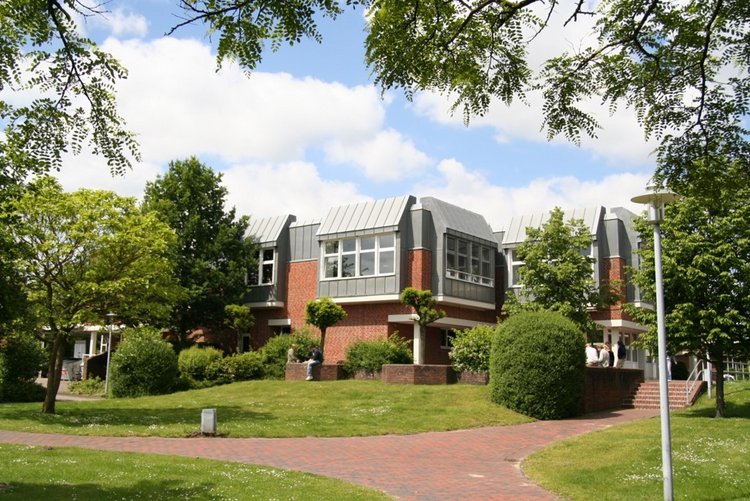 In 1995, the Vechta campus of Osnabrück University became an independent higher education institution. Vechta achieved independence with its status as a Wissenschaftliche Hochschule des Landes Niedersachsen mit Universitätsstatus (academic higher education institution of the state of Lower Saxony with university status). As the name of the institution was changed to Hochschule Vechta, new degree programmes, such as Gerontology and Environmental Sciences, were established. In 2000, around 1,900 students were studying at Hochschule Vechta.

The Hochschule Vechta was amongst the first institutions to reorganise its degree programmes to the modular Bachelor’s and Master’s programmes. Starting from 2003, the Bologna reform was being implemented in this way. Since then, teacher training has been based on the Bachelor Combined Studies and the postgraduate programme Master of Education. The Hochschule Vechta was one of the first higher education institutions in Germany to qualify graduates according to this new model.

With the amendment of the Lower Saxony Higher Education Act, the Hochschule Vechta was officially renamed to Universität Vechta (University of Vechta) in June 2010. New academic subjects such as Business and Ethics: Social Business, as well as Cultural Studies, were added to the range of programmes. In 2011, the Centre for Regional Learning was founded, and one year later, the School of Education was established.  The number of students was constantly increasing. This growth was accommodated by the newly constructed lecture hall building Q (photo above), the first new campus building in 30 years.

Further milestones followed in the past years. The university kept growing, became more cosmopolitan and dynamic, but still remained regionally anchored, personal and familial. In 2016, the Constitution was modernised. Faculty structures were introduced, the Service Sector was restructured and research institutes were realigned. In 2017, the Koordinationsstelle Transformationsforschung Agrar (Coordination Centre for Sustainability Transformation Research on Intensive Agricultural Regions) (trafo:agrar) was established and the An-Institut für Kulturanthropologie (Affiliated Institute for Cultural Anthropology) of the University of Vechta was founded in Cloppenburg. In 2019, the Graduate Centre was established and the dining hall was expanded. The Media Literacy Centre as well as a start-up centre in cooperation with the districts of the Oldenburg Münsterland were launched in 2021. New research institutes have been established and the new Master’s degree programme Transformation Management in Rural Areas is to examine transformation processes in rural areas from an academic point of view. The infrastructure has also been modernised (assembly hall, lecture hall B, sports facilities, IT) and additional buildings are planned to be built (sports hall). In recent years, an average of 5,000 students have studied at the campus in Vechta; many of them have been enrolled in the Bachelor Combined Studies and the Master of Education. Under the difficult circumstances of the coronavirus pandemic of 2020/21, the university has been able to provide the best possible, even though largely online, teaching offers and examination services by acting quickly and consistently, and to ensure high-quality working and studying conditions.